The Erasmus University Hospital in Rotterdam is the largest and most prestigious hospital in the Netherlands. A completely new building containing 26 new operating rooms were being planned alongside modern and upgraded facilities for other areas of the large complex. The hospital decided to modernize the workflow and reduce the amount of paper, posters and other analog systems that were previously in use. The goal was to have a comprehensive, digital, smart and integrated way of working for the staff in the new operating rooms. For this to be realized, an innovative technology was needed: FHD video from operating tools would not only have to be streamed with no latency or lossless image quality to any surgical display but should also be capable of switching those video sources seamlessly. These copious requirements were successfully solved by Advantech, INTER and SigmaXG by Technolution with an exemplary co-creation solution.

The OR of the Future

By Co-working together with INTER, who is specialized with multimedia video-over-IP streaming software, a complete solution could be offered to the hospital. The AVAS NDcoders that encode and decode the video streams up until 4K resolution were created together with SigmaXG and is based on the technology of Technolution were directly integrated into the Advantech PAX surgical displays. This not only saves energy and space, but also reduces the complexity of the system and facilitates the installation. The surgical displays of Advantech realize an accurate image representation of the source with no latency, simplifying and improving the quality of work for the doctors and staff in the operating room. Additionally. Several all-in-one computers were used to control and interact with staff in and outside the operating room. This enables an infection-free operating process. The door movement counting together with an intercom and multimedia system that integrates external streaming, the IoT hospital is now reality. The ORflow dashboard by INTER additionally allows staff to prepare with a meeting before an operation and add different applications into the workflow while keeping track of tasks during the operation. Recording and streaming sessions is also realized by the software by INTER.

To realize the OR of the future an elaborate system has been created. The user interface presented by INTER can be controlled via touch and is the main interaction point of the users. This is connected by a switch that then speaks to the NDcoders integrated into the surgical displays. For recording a connection to the CMS server is realized. Several other options for streaming and archiving the solution are available, as seen in the diagram below. 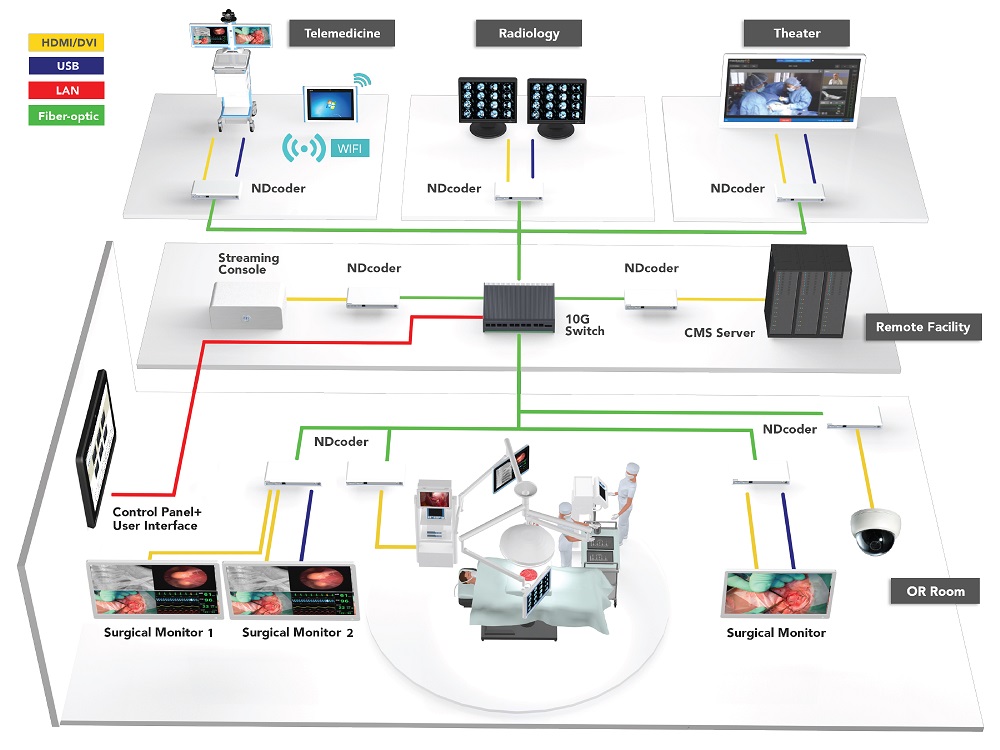 Summary of the Benefits